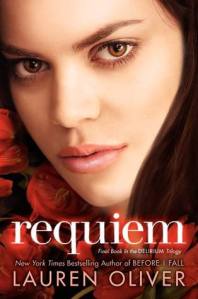 This lazy, terrible trilogy made me furious and so I anger-read this final stupid book in one day and I am excited to write this review because I want to save you the time of reading this stupid trilogy. I’m using the work stupid a lot because books 2 and 3 don’t deserve a fancier synonym. They don’t deserve the investment of time of accessing a thesaurus to try to make myself sound smarter. Because why should I try harder when Lauren Oliver obviously did not. Also there are spoilers because I give zero fucks.

This trilogy made me feel the same way The Matrix trilogy did, just on a smaller scale. The first installment had me like “yeah! Neat!”and then the second one was like “um..okay, but why?” and the third book has left me with anger and no sense of resolution AT ALL.

Alex is back and oh boy is he a jerk. We’re treated to a jealousy match between Lena and Julian and Alex and Coral (vomit), a girl that pops out of nowhere to help Oliver give us this lover’s quarrel. Could someone explain to me why Alex is mad at Lena for moving on? He helped her escape. He sacrificed his safety for her freedom. THAT WAS THE POINT OF THE FIRST BOOK. Why is he so fucking surly? Why the revenge relationship? Was she supposed to wait for you? Why not just give her the chance to figure things out and win her back? Why you gotta act like a teenage girl Alex?

Oh, and by the way, are these three books supposed to be over the course of like 2 months? Lena’s best friend Hana has had her procedure and is getting married to the mayor’s son in like 2 weeks at the beginning of the book. Guys, this part was SO unnecessary. Why did Fred Hargrove have to be abusive? Why did this have to be in the book at all? It’s not like she and Lena reconcile at the end. Hana just walks away from the house into the woods to escape the bomb that the resistance has planted in her future husband’s house when Lena warns her to get out and we never see her again.

Thanks Ms. Oliver for throwing in all this complicated political bullshit in like one chapter too, like we have time at this point to appreciate it. Oh, so Fred planned the explosion at the prison for uncured people/ex-wives/political prisoners to kill his dad and strengthen his position to become mayor and bring the hammer down on the community and now he’s going to get all North Korea on Portland, Maine? Please. And we see none of the suffering caused by his “energy policy” because we don’t have time. We just see Hana’s family and Fred’s family showing off how much electricity they can waste like we’re in France in the 1800s.

This book has zero depth. Zero. At least the Hunger Games trilogy made us FEEL things. We have a main character for a reason. They become a central figure. We rally to them. Why is Lena the person we’re paying attention to? Who cares? At the end they defeat the Capitol, bringing peace to everywhere. At the end of this trilogy they are tearing down the wall in Portland (with what, their bare hands? It’s cement, you dummies.) and THE ENTIRE UNITED STATES is supposed to be like this. Like the neighboring town isnt’ gonna send helicopters and soldiers to bomb the shit out of them. This trilogy is focused on a nobody girl from a small “city” in Maine that walks around New England “surviving” with her new Wilds friends, only to come back to Portland and bomb a building and….? This whole trilogy was Matrix Revolutions level disappointing. At least she and Alex decide they still love each other at the end, right? *throws computer out of the window*

*retrieves computer* I still maintain that the first book is well written. If I was a reading/English/creative writing teacher I would have my students read it, and then create their own version of what happens afterward. I am 100% sure that what they would come up with would be better than the two books that Oliver has written. I am mad that she wasted the paper it took to print however many of these books that have been distributed. The subject matter and plot have potential, but they have fallen embarrassingly flat.