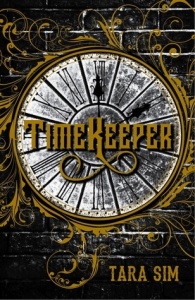 Imagine if there was a set of gods that controlled Earth, water, sky, and time. Kind of like a weird Captain Planet situation. Only in this mythology Captain Planet murders the god of time for asking humans for assistance with managing the fibers of time. So there are powerful clocks installed all around the world that are inhabited by clock spirits who keep the time around each area moving in the absence of this god, Aetas.

Without the clock spirit, its clock, and the central cog in the clockwork a city or town becomes magically Stopped, frozen in time forever, impenetrable from the outside. Someone is going around bombing clock towers in England, where our story is set. The main character Danny, a clock mechanic whose father is trapped in a Stopped town, is the youngest clock mechanic ever and must discover who is behind these terrible incidents. Along the way he falls in love with the clock spirit in Enfield, and this complicates his efforts.

I have to admit that this book was a little below where I usually read in terms of reading level. It’s classified as YA but it’s obviously meant for very young YA. The sentences are short, the print is bigger, and it was an obvious plot. The person you most medium expect is the bombing culprit, and the resolution of the story is overwhelmingly positive. Tara Sim is obviously not trying to break anyone’s heart or scar childhoods with this one.

What I really loved about it was the new mythology that was laid out and the questions it posed for future volumes. While I do not intend to follow it further myself, if you have young tweens that enjoy magical stories this would be an amazing book to hand to them. In addition to it being a fun, historical, fantasy story, the main character Danny is gay and we hear him explain how he comes out to his coworkers and family, and watch as he falls in love with Colton, the clock spirit. For a younger person who may be asking questions about their own sexuality, this was a beautifully portrayed journey that would inspire anyone to be themselves and to pursue happiness.

A solid start to the Timekeeper series, with the second installation Chainbreaker recently released into bookstores everywhere, it’s a great time to discover a magically transformed London, teetering on the brink of chronological collapse. Go get you some, or at least get it for a young reader in your life. They are going to love it.