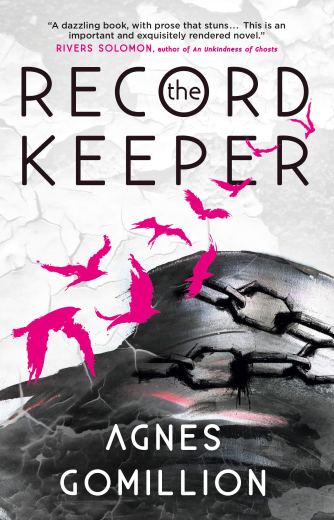 The Record Keeper by Agnes Gomillion was provided to me as an advanced reader copy by Titan Books in return for an honest review and a spot on a blog tour. The Record Keeper is on sale now and is available in both paperback and ebook formats.

Read the synopsis for The Record Keeper here.

In the past three years of reading and reviewing books in earnest I have learned to recognize when books are available for me to read and yet not written for me in the sense that there is minimal content with which I might relate. Some reviewers make the mistake of writing a book like this off, claiming it was boring or not compelling, missing the fact that not everything is for everyone. There is a significant difference between a poorly written book and a book that is not about you. While I did have trouble connecting to this story (especially as it was touted as based on the life of Frederick Douglass, who I only know a small amount about thanks to history courses) it is undeniable that its premise, and the style in its telling, are laudable.

The Record Keeper is written in a way that will cause you to hear, taste, smell, and feel what is going on in the story. Gomillion writes so evocatively that at times it felt like the book was singing to me. At no moment was I bored and the amazing writing style matched up well with a story that did not stop moving forward…

…until about the last 25%. Suddenly the story had to stop to give all the information that we needed to understand what was going on. Because the story is told primarily from one point of view, and that character’s point of view is limited to always following the rules and trying to do what’s right in order to maintain her status, we miss out on a lot of the things that might be brewing in the underbelly of this strange society. A story that was chugging along nicely came to a screeching halt, and made for an ending that was less than exciting.

I am glad that this book gives a SFF viewpoint of the intra-black relationships and struggles that exist due to white oppression. Right from the start a society has been set up where some black people are meant to take care of and ‘rule over’ others. This speaks to many different concerns in the black community, from light vs. dark skin (colorism) to issues of hair, education and assimilation into white culture in an effort to rise above – we see a clear break between black communities in this post-WWIII world. I’ve read too many books that only deal with white and black relations, when it’s important to see the effects of those white oppressive techniques on the black community when the white instigators are taken out of the picture.

A story mechanic that I really enjoy with any character who thinks they know it all is the slow cracking of a shell. The main character Arika thinks she has everything under control, but then she witnesses one thing that contradicts what she’s been told, which leads to other ideas being questioned, until her entire shell comes crashing down and the truth of her situation is that she never had any control, in fact her belief that she had control was what the people in control were using to keep her under their thumbs. The moment Arika sees how the workers are treated, how sick they are becoming, with no help in sight, the novel takes a turn down a darker path where we know she will need to look at herself in the mirror and decide how she will reconstruct her worldview around these new truths that have come to light.

If I had to ask for anything, it would be that I wished for more world building. We’re in the eastern United States and that’s pretty much all we get. Other SFF series use this same idea – nuclear war or other such conflicts constrict society to certain areas where they vie for resources and rebuild society in some primitive way in which one group of people obviously come out on the better end of the deal. It’s a tale as old as time in the current SFF genre, especially in YA literature. A little more worldbuilding here may have set this book apart from The Hunger Games trilogy, or Marie Lu’s Legend trilogy, or Lauren Oliver’s Delirium trilogy. I hope this will come in the future novels in the series, due out in 2020.

Overall I feel like this book is one to add to your TBR, but more importantly I think it’s one that English or History teachers might consider adding to their curricula. 8th graders and up could benefit from a side by side analysis of the story Gomillion is telling and actual historical events. The Record Keeper would be perfect as a class set for any classroom that is willing to dig into societal issues using excellent writing as a foundation for discussion. Either way, definitely give it a try!