Without You, There Is No Us

I read this book completely on the recommendations of my Facebook book club Bitches Gotta Read (shout out to Samantha Irby at http://www.bitchesgottaeat.blogspot.com) and I would have NEVER picked it up on my own. In the midst of our current political climate, however, I am glad that I did. I discovered that we may have more in common with North Korea than we think.

Suki Kim traveled to North Korea to teach English at a new university meant for the sons of the country’s most elite people. She keeps the fact that she is a writer/researcher/journalist a secret somehow, and goes under the guise of being one of many Christian missionaries who have been recruited to teach there. She is of Korean heritage herself, and part of her journey is also to explore how her country has changed after being divided for so long.

I won’t lie, this is a tense tale. She is always watched, everything she does on the internet is monitored including emails. Every lesson they teach has to be approved ahead of time. Not only is she being watched by the North Koreans around her, but also by the missionaries she is there to work with. It is exhausting watching her exhaust herself as she attempts to keep up the required level of awareness and compliance.

We get glimpses of the famine ravaged population, and several field trips that the teachers take as a group reinforce our knowledge of the staged nature of visiting this country. Monitors, play actors, rehearsed lines, and staged people are all incorporated when the teachers are taken outside of the school walls. The TV stations only broadcast how great the leaders are. The songs are of the country’s prosperity and loyalty to the country and its leaders.

So while the book was very informational when it came to opening my eyes to how terrifying visiting this country would be and how sad and random the division of the country was for families and the people who live there, as I read I kept hearing echoes of American ideas being spouted today, now, in our present time. I shared the following paragraph on Facebook and I want to place it here as well. Read it and think about where you’ve heard similar sentiments. 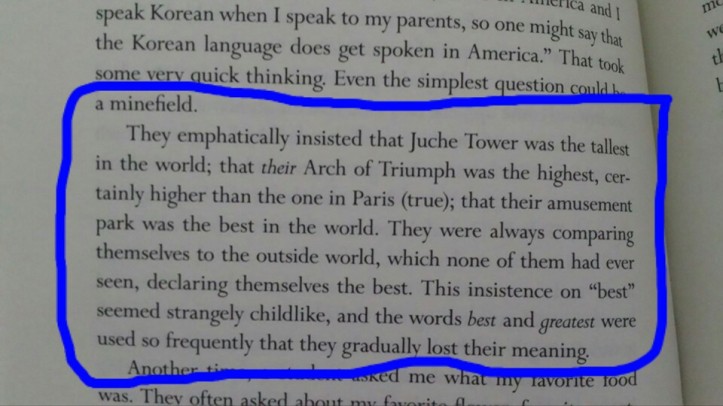 There are several times toward the end of her tenure at PUST that Kim becomes emboldened and tries to sneak in information and open her students’ eyes to the world outside of their country. But they had been told for so long and so fervently that they were the best, the rest of the world crumbled around them while they were the pinnacle of government and achievement, that no logical or factual argument could sway them. Granted, she could not work too hard to convince them or she would face some pretty severe consequences, but every time I saw her try to bring truth to them and get shut down by their indoctrinated ways, I thought of the times I have talked with friends and family about the important issues in our American lives today, only to be screamed at or shut out with common lines like “you can believe what you want, I have a right to my opinion” even in the face of issues that are factual and not opinion.

Reading this book helped me understand why North Korea is the way it is. I shudder to think at the level of effort it would take to alter over 60 years of brainwashing and dictatorship in a populace that has been cut off from the rest of the world and its events and advancements for just as long. Once you have been doing something for that long, it would be easier to continue than to exert the effort to change and learn. I am certain that for these citizens it would be at least equally terrifying to catch up to the world if they were free to, than it would to continue to accept their current conditions.

Only 8 years of Glenn Beck, Fox News, Rush Limbaugh, the Republican Party were enough to turn a good percentage of our country to the same brick wall mindset, and I know what it’s like trying to convince someone that “Obamacare” isn’t an actual health care plan that is run by the government while they scream Benghazi in my face. I truly hope that we do not slip the rest of the way into a regime that will insist that we call everything great, fabulous, fantastic, and wonderful when they really are not. There are lessons to be learned by reading this book and warnings we should heed. I just hope things turn out okay for us and that it isn’t too late.