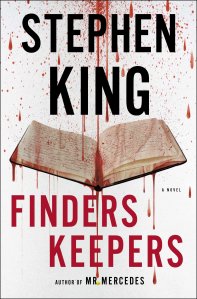 This being a middle child I decided to just list my observations. The central plot of the book is that a famous author gets murdered and his money and manuscripts are stolen and hidden by the murderer who is arrested for something unrelated. In present day the trunk and its contents are unearthed by a young boy whose family is struggling through the recent recession and as a result of the Mr. Mercedes attack. The murderer and the boy are slowly brought together and the results are pretty fantastic. Here are some points for thought.

I think this story was more well crafted and less jerky than Mr. Mercedes and you could get away with reading it as a standalone without either of the other two books. And you should, because it’s really, really amazing and thrilling. I don’t know how the next book could be better, but I guess I’ll find out.

PS: I want to know how much money he gets for the number of times he writes “Mercedes” and “Moleskine notebooks”