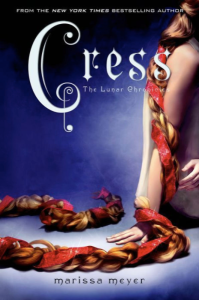 You have to give this to Marissa Meyer, you can’t even tell the root fairy tales very clearly anymore. We have to save Earth from Levana and her armies, we must get Princess Selene to her rightful place on the throne!

I think this book is my favorite so far. This idea of Lunars being divided between those with powers and those that have none (a.k.a. Shells), and claiming to harvest the shells to murder them to cleanse the population of non-powered people – pure genius. Shells are more dangerous than anyone really thought, and this book shows you all the ways they threaten Lunars and Earthens alike.

The interaction between Captain Carswell Thorne and Cress is super cute. He’s so kind to her and never takes advantage of her despite his already established roguish demeanor. He accommodates her ignorance, helps her adjust to the world, and keeps her safe (for the most part). I love that she has a crush on him from afar, and her slow realization that he’s only human just makes her love him all the more.

We lose a member of the crew in this part – Scarlet is captured in a scuffle between Cinder et al. and Cress’ jailors, and taken to Luna where we meet mysterious Princess Winter, the stepdaughter of Queen Levana. Exchanged for Scarlet in the scuffle is Jacin, a Lunar soldier who was a guard for Cress’ captor, but reveals he’s actually loyal to Princess Winter and agrees to help them as long as it gets him back to Winter.

All the characters are here, and we watch them plot and plan to stop the wedding between Emperor Kai and Queen Levana. We learn more about the mysterious letumosis plague and its progression. We watch Wolf mourn and pine for Scarlet while all these developments swirl around him. The ending to this book sets all the pieces in motion for only two options: revolution or war.

This series is not one that I would make you rush to read, that’s Throne of Glass. However, Marissa Meyer has created a fun, enjoyable romp through tales that are familiar, set in an environment and conflict that is not, so when you get to it, or maybe if you just need a break from other more typical YA books, look up the Lunar Chronicles. You won’t regret it. On to Winter! It’s waiting for me at the library.