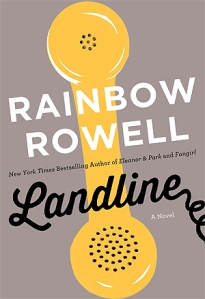 Another book by Rainbow Rowell, but this one is for us grown folk. Georgie is a successful tv writer whose husband is Neal. The book begins with their fight about her having to stay in LA for Christmas to write the first 4 episodes for a show that she and her long-time writing partner Seth thinks will be picked up by a huge tv executive.

We learn how she came to meet both Seth and Neal – at the college newspaper that she always dreamed about writing for. Seth is her ladies’ man comedic writing partner, and Neal was a quiet, mysterious cartoonist that caught her attention. Rowell sets us up for the classic “goes to the guy that was there all along” kind of story but instead gives us more of an “It’s a Wonderful Life” style story. I just finished the book last night, and I am not altogether sure that I liked this turn of events.

Her distress about Neal and their two children having left to be with Neal’s family in Omaha for Christmas distracts her from the work that was keeping her home anyway. The book is called Landline because there is an old phone in her childhood bedroom, which she discovers when she goes to spend time with her family instead of being in her house all alone for Christmas. She uses it because the battery in her iPhone won’t hold a charge, and since she didn’t have a charger when she went to her mom’s house, she uses this landline instead…

…and calls Neal in the past when they had had a fight and she had thought he had broken up with her. She feels like she is going crazy and hijinks ensue. That’s all I’m going to say, you need to read the book to have the same weird experience I did.

But wait! I have more things to say!

I don’t think that this plot worked for me. Had the workaholic been a man and his wife had “had enough” and left with the kids I would have eaten it up and been like “yeah appreciate your woman” and it would have felt satisfying. I was continuously bothered by the double standards through the book: a woman can’t have a male writing partner or else the husband gets jealous, a woman can’t be at work at all hours, a man as a stay at home dad becomes resentful when a woman might just be viewed as doing ‘women’s work,’ and so on and so forth. I think the part that bothered me the most was how she completely falls apart once he leaves and doesn’t get the work done that she stayed home to do in the first place, and then it becomes her job to fix the relationship by reaching into the past through a magical phone – just, no.

I feel like this was a failed attempt at showing how a woman would somehow handle a typically male situation better, maybe? But the gender swapping just seemed to make the weight placed on women even heavier, and all I could think was that a man would not have done these things, he would have said something like “my career is on the line!” and then maybe finished quickly and moved the flight he already had to Christmas and surprised them.

This book was very well written, but left me with several questions and a bad taste in my mouth. What about Seth? Why doesn’t Neal have to apologize for NOT PICKING UP HIS PHONE AT ALL? Also why doesn’t Neal have to apologize for having this temper tantrum? We learn through the flashbacks that he’s like “oh baby, I’ll never resent you. You’re a writer and this is what you want to do, I’ll stay home with the kids baby no worries.” OH DOING ~ALL THE THINGS~ MAKES YOU FEEL RESENTFUL AND LONELY AND UNDERAPPRECIATED? NO SHIT. TELL ME MORE.

This book just fell so flat for me, and left me angry to boot. But there was a budding lesbian relationship thrown in there for good measure, so I guess she’s still #onbrand? Also puppies? I’m not that easily distracted, Rainbow.

Eleanor and Park was so good (“so good”) so reading this book was really disappointing. This came out of the same author? I mean, it wasn’t terrible so if you’re a fan you should read it to see how you feel. This isn’t a book I would encourage you to NEVER read, just know that it’s a little tangled and probably not her best work. I would be interested to hear your thoughts on the book, so if you’ve read it or are going to go get it now, come on back and leave your thoughts in the comments.