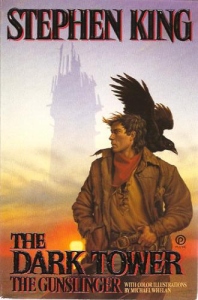 I am reading The Dark Tower series by Stephen King in anticipation of the movie release coming up on August 4th. The movie claims to pull from several books in the series, but my goal is to be through at least the first 3 by then: The Gunslinger, The Drawing of the Three, and The Waste Lands.

The Gunslinger is a very fast read. If I wanted to, I could have sat down and read the entire thing in one day. There is obviously a HUGE backstory that we know nothing about. We know there is something supernatural going on, there is Roland the gunslinger chasing the man in black through a desert, stopping at different towns along the way to rest and restock. We don’t know why he is chasing him, or why the man in black leaves traps laid for him.

Along the way he comes across a boy named Jake, who seems to have been transported into Roland’s world by the man in black for a purpose that we are not aware of. As they travel together, Roland tells Jake stories about his past, including how he trained to be a gunslinger and that he may have been royalty of some kind.

This book was published one year before I was born, and the entire series was completed in 2004, a year before I would shake King’s hand crossing the stage at my University of Maine graduation. When you consider that in the Afterword of The Gunslinger, he admits that it took him about 12 years just to bring this first novel together, moving between it and other books like The Shining or The Stand, The Dark Tower series took from 1970ish to 2004 to finish: almost a full 35 years.

This is not surprising when you consider all that The Gunslinger sets up in a mere 220 pages. Roland’s backstory, the man in black, the mystery of the Tower and why it calls to Roland, the three people he must draw from their worlds to help him in his quest, among other things including those who guard the Tower and are too terrible for even the man in black to speak of.

The difficulty with The Gunslinger is that it is written in the style of an epic like The Iliad or The Odyssey. The language gets tangled a bit sometimes, as though it’s got a rhythm all its own, and I found myself having to reread some paragraphs just to get a sense for what it was trying to tell me. This is truly the end of the beginning of a fantasy epic that Stephen King has constructed for us to chase. His Tower, which we must find and conquer.

I have said before that King novels are books that have to come at the right time for me to read them. It seems that, conveniently enough, now is the time for me to work my way through this series. Come along with me, it’s going to be an interesting, magical ride.