The Sky Is Yours 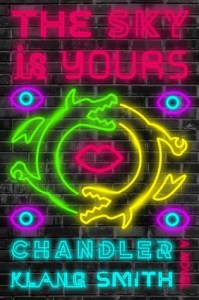 I did not finish this book. I even broke my rule about getting to 30% before passing judgment. This book was so bad in the first 20% that I had to force even that, but then I just had to stop.

I’m not sure how Chandler Klang Smith managed to make the dragons the most boring part of the book. They just swirl above the metropolis burning random stuff and it’s SO. BORING.

There is a prison complex in the middle of the city that is locked and surrounded by a huge wall and generations of people have lived and died inside. It’s basically its own society and it’s also where the dragons burn the most. That could be like Batman: Arkham City cool, and honestly it should be a little depressing, but overall it just read as…normal? Which made it lacking in interest, what’s the word? BORING.

There is an immature rich boy who is engaged to a “duchess” with endless teeth(?), and he runs away and finds a girl and her dead mom (?) on the central garbage island and fucks her even though she’s childlike and doesn’t even know what having sex is (and neither does he so he doesn’t even make her feel good – I think he actually says “oh yeah, I probably hit your G-spot, definitely.”). She thinks that robots have taken over the city and are waiting to kill her if she goes back.

This book is confusing, unnecessarily obscene, kind of rapey, and the fun parts are somehow boring and ancillary AND THAT’S JUST THE FIRST TWENTY PERCENT. 80ish PAGES.

To be fair I’ll include the description from Goodreads here too. I think it’s a little extra but hey, you gotta try to sell the book, right?

Read this book if you want, but I say skip it because it’s gross and boring and there are SO MANY GOOD BOOKS TO READ THIS YEAR. I added some of my own commentary for flavor. Enjoy.

A sprawling, genre-defying epic set in a dystopian metropolis plagued by dragons, this debut about what it’s like to be young in a very old world is pure storytelling pleasure. (NO IT’S NOT OMG DID WE EVEN READ THE SAME BOOK)

In the burned-out, futuristic city of Empire Island, three young people navigate a crumbling metropolis constantly under threat from a pair of dragons that circle the skies. (This makes it seem like it’s suspenseful. IT ISN’T) When violence strikes, reality star Duncan Humphrey Ripple V, the spoiled scion of the metropolis’ last dynasty; Baroness Swan Lenore Dahlberg, his tempestuous, death-obsessed betrothed; and Abby, a feral beauty he discovered tossed out with the trash; are forced to flee everything they’ve ever known. (This sure sounds like a neat journey, right? I DIDN’T GET HERE BECAUSE THE BEGINNING WAS SO BAD) As they wander toward the scalded heart of the city, they face fire, conspiracy, mayhem, unholy drugs, dragon-worshippers, and the monsters lurking inside themselves. (Oh my god no one wants this) In this bombshell (REACHING) of a novel, Chandler Klang Smith has imagined an unimaginable world (with dragons and horny dudes? Oh my goodness I can’t even imagine that kind of world…WAIT…): scathingly clever and gorgeously strange, The Sky Is Yours is at once faraway and disturbingly familiar, its singular chaos grounded in the universal realities of love, family, and the deeply human desire to survive at all costs. (Honestly I think we’d all be better off if these characters died. Especially the stupid dude whose nickname is, I shit you not, THE DUNK.)

The Sky Is Yours is incredibly cinematic, bawdy, rollicking, hilarious, and utterly unforgettable, a debut that readers who loved Cloud Atlas, Super Sad True Love Story, and Blade Runner will adore. (This is all false advertising, don’t be lied to.)