Dance of the Gods (The Circle Trilogy #2) 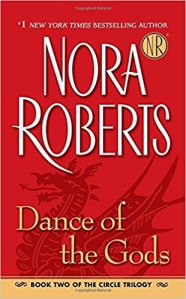 It’s about this time that I get bored with Nora Roberts. Her books are so predictably formulaic that if you read too many in a row you start to hate them simply because you know what’s coming next like ten pages ahead of time. Dance of the Gods takes our circle of 6 heroes (3 couples) into Moira’s realm of Geall to prepare her citizens to fight Lilith and the vampire army in the Valley of Silence on Samhain.

There are a lot of moments in this book when the group decides to flex their muscles and make a statement by poking at Lilith’s forces that are hidden in the nearby caves in Ireland, which is where they are staying as of the first book. Each time they do this ends predictably – someone learns a lesson about not going it alone and making sure to work together. The person who learns this lesson the hardest in this book is Blair, the Buffy the Vampire Slayer character that was ignored and then abandoned by her father and whose daddy issues cause her to want to always be alone. The “everyone I ever loved has left me” boo hoo pity party really makes her badass character a lot less believable, but you’ll make do I’m sure.

Roberts’s thing being a couple per book, Blair is destined to be with the shape-shifter Larkin, who is from Geall and came with his cousin Moira through the Dance of the Gods (the stone circle) to train with the other four members of Morrigan’s circle of six. He shifts into different kinds of animals and at one point he shifts into a hawk in front of Blair and she says something like “that’s so hot” and she does that a couple of times, enough to make me think she might be into bestiality, but I’m not sure.

He wants to care for her, she believes she’s meant to always be alone, and they fight through that tension to have sex a couple of times, until finally she admits she loves him after they return to his country and get ambushed by a bunch of vampires that are also preparing for the battle. I get the themes that Roberts really wants to touch on here: that you can be a tough woman and a sensitive one too, but in the way of romance novels the story doesn’t get much deeper than what gets them into bed. And that’s okay, if I hadn’t just read four other novels set up exactly the same way just before this.

After returning to Geall the group informs the country that (1) yes, women are in charge here and will be teaching you how to not die, (2) vampires are real, and (3) magic is cool and okay. I liked the way that the women dealing with other women was written here. Some women wanted to hold onto the “women’s work” but were brought to understand that anything is women’s work (small caveat: it takes Glenna asking how they might protect their babies to get them to fight, so I guess it’s not exactly 100% feminist but their lives were on the line so whatever works?).

The book ends with Blair agreeing to marry Larkin (again, I don’t understand why the ending for every couple has to be marriage) and Larkin agreeing that he will leave Geall behind to return to Earth with Blair so she can continue to be a hunter of vampires there, and they streak across the sky with a flame sword and I guess she writes an entire sentence in the air like a plane might? Again, this book is a lot of “LET’S SHOW HER WHAT WE’RE MADE OF” and a lot of it just ended with them getting their noses bent.

This is not my favorite book of the series. It makes a strong woman look weak and needy, and the actions the characters take are stupid and dangerous given the stakes. I’m going to wait a bit before beginning Valley of Silence, because it has my favorite pairing and the battle is cool, but I have to get this Nora Roberts taste out of my mouth so it doesn’t spoil it for me.