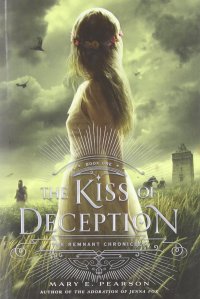 I would like an explanation for why no one prepared me for how fucking awesome this book would be. I demand to speak to a manager. From the very first chapter Mary E. Fucking Pearson had her claws in my soul and was dragging me through this story at a breakneck pace.

The book is YA Fantasy, but it’s that YA that I love when yes, the characters are in their late teens, early adulthood, but it’s mentioned so rarely that you can read this and imagine them older too. The main character, Princess Arabella a.k.a. Lia, runs away with her maidservant Pauline on her wedding day, escaping an arranged marriage meant to forge an alliance between two neighboring kingdoms. They take refuge in an inn run by Pauline’s aunt in an oceanside town. They work to earn their keep and see a future for themselves there.

Problem is that in her rush to escape, she was tracked by her betrothed from Dalbreck and an assassin from the barbarian realm of Venda. Both these men (boys) are referred to as The Prince and The Assassin when we hear the story from their point of view, and when Lia interacts with the both of them when they both find her at the same time in her hidey-hole they are referred to as Kaden and Rafe and we don’t have any fucking idea which is which as we watch their interactions.

MARY. WHY DID YOU PLAY WITH ME LIKE THIS MARY. I need to know whether she was into the prince or the assassin to know whether to be filled with hope or dread and you gave me naught a clue so I was nervous THE WHOLE TIME.

BITCH I NEED TO KNOW WHO I’M ROOTING FOR.

Aside from the character drama that I am still fucking salty over (MARY YOU MUST MEET ME AT DAWN CHOOSE YOUR WEAPON) the fantasy elements are set up so slowly and sneakily that by the end I’m like omg there is a prophecy and what does it imply is gonna happen? Who is the Dragon? Venda has magic? WHAT IS THE GIFT WHAT IS HAPPENING I NEED TO KNOW MORE MARY.

Do you want to know how fast I went to the library for the next book in the series? I finished this book Wednesday night, and when I went by the library on my way home on Thursday to return it I picked up The Heart of Betrayal (The Remnant Chronicles #2) while I was there and if you don’t think I went to bed early so I could get through the first 100 pages before I passed out from exhaustion then you must be new to Angry Angel Books.

(By the way, I just finished day 9 of the new school year and I think I’m sleep-teaching at this point because I am so exhausted I’m either sleep-walking or dead or maybe I’m dreaming but I AM SO TIRED SOMEONE SEND HELP.)

I don’t even want to spoil this experience for you. You need to suffer as I have suffered. YOU WANT THIS SUFFERING EMBRACE IT READ THIS BOOK ARE YOU READING IT YET WHY NOT HURRY UP HOW ABOUT NOW NO WHY NOT BITCH GO GET THIS BOOK DON’T WALK AWAY FROM ME I’M TALKING TO YOU.

Side story: When I was at the library checking out this book a girl walked in with one of those rolling backpacks and she was still in her school uniform and she was 12 if she was a day and she made a direct beeline from the door to the children’s section in the most businesslike way that I was absolutely struck with a fit of laughter and when the librarian asked what I was laughing at I said “nobody better get in that little girl’s way because she is here for books and she is not messing around” and I hope that little girl gets all the books she came there for because I totally respect her attitude.

2 thoughts on “The Kiss of Deception (The Remnant Chronicles #1)”