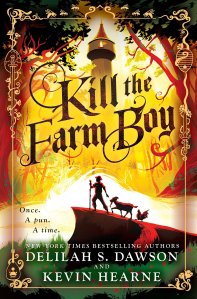 The Colour of Magic by Terry Pratchett (Discworld #1)

When I began reading this new release that I grabbed on a whim at the library, it was a really fun start. A nobody that cleans up dung on his family’s farm is chosen by an ugly, drunk pixie to be a Chosen One and he sets off with the goat that the same pixie gave the gift of speech to in order to exact revenge on the lord that killed his brother. There is an aspiring dark lord and even a large woman in a chain mail bikini – and it was when I reached this point that I remembered I had seen this before.

In the spring of this year (2018) I attempted to read the Discworld series by Terry Pratchett, but put it down after the second book. I love the silliness, but in books like these it tends to get stuck on level 10 and never deviate, creating a situation where you get bored even though the setup is silly and bucking the tradition. There’s no give and take or normal versus silly – you just go from zero to sixty silliness per hour, the authors don’t let up on the gas, and it’s tiresome.

Sorry for the short review, but I didn’t read very much of the book and so I don’t want to mess with your opinion too much. If you like the Discworld books you will LOVE this novel. It’s just not for me. It’s too much and trying too hard all at once and my brain shuts down. But you might like it, so give it a try.

2 thoughts on “Kill the Farm Boy”