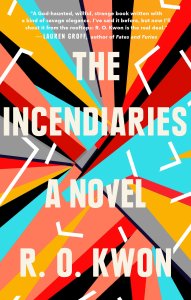 R. O. Kwon’s book can be found on many of the year-end “best of” lists. When I kept seeing the title pop up again and again, I reserved it at the library and began reading it right away. It’s a love story of two people in passing – one on his way out of the grip of religious extremism, and another on her way in as a way of coping with the fact that while she was driving she got into an accident that killed her passenger, her mother. The book is constructed as a kind of eclipse, we see them as separate entities, we see them overlap, and then we see them coming apart again, with Will trying desperately to hold on to a woman that is heading into a universe from which he has already escaped.

You could read the description on the book jacket and be okay never reading this book. It describes what happens perfectly, and the only mystery that remains is what happens to Phoebe after the bombings organized by the North Korean cult led by John Leal, the third member of our story’s triangle.

This is yet another circumstance in which I find myself bored and baffled by a book that other people are raving about. I read all 214 pages and I felt nothing. Phoebe is a woman who is wrestling with the grief and guilt that has festered since the night of her accident. She is looking for explanations and a definition of who she is if she is in fact a murderer. She is looking for forgiveness from someone, because she will not find it from herself. And she is slowly sinking into a terrifying cult because in her time of desperation, it’s the only structure and love that she can find that makes her feel needed and loved in equal portion to the punishment she feels she deserves. I should feel something in reading this character. This is deep and emotional and heart-wrenching and yet I come away feeling nothing.

This book did not make me cry, but it should have on several occasions. So many of Will and Phoebe’s interactions should have been moments where we feel desperation, clinging, and loss – maybe a sense of emptiness, like biting into a decadent chocolate rabbit only to find that it’s hollow inside. When we feel Phoebe slipping away from Will toward John Leal, I should feel Will’s anxiety, longing, and despair. When he tries to go to the cult meetings with her to pull her out, I should feel him gasping for air, diving into a world that threatened to drown him before but that he’s willing to risk entry into in order to save the woman he loves.

This book should have grabbed my heart, wrung it out, and then thrown it on the ground. Instead I just finished it in two days and asked why I took the time to read something that unmoving. Don’t get me wrong, you should give it a try too. It was flawlessly written and the themes are very well presented. But if you’re looking for the experience of the characters and the feelings brought on by those themes, you may find yourself, like me, disappointed.