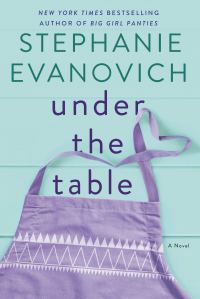 I have to be honest with everyone here. I may have confused Stephanie Evanovich with Janet Evanovich, writer of the Stephanie Plum series where she becomes a bounty hunter. When I was perusing Edelweiss+ for ARCs I saw this book and went “I remember liking those bounty hunter books, it’s cool she wrote some standalones! I’ll try it!” but my subconscious just combined the Stephanie from Stephanie Plum and Evanovich from Janet Evanovich and I got stuck with this turd of a book.

Zoey is on a one year legal separation from her husband and leaves his verbally abusive ass behind in Cleveland, Ohio to live with her sister Ruth in New York City. She starts a cooking service for small groups and personal chef needs, and is doing pretty well about 3 months into her New York separation. She puts a Craiglist ad up for her services as a personal chef, and a man answers it asking for a Creole-themed meal for a small business gathering at his home.

Tristan turns out to be a grown man-child who grew up with his grandparents in the US Virgin Islands after his parents died when he was 3. He was homeschooled until he was 16 and was completely sheltered from all things pop culture and also how to take care of himself apparently. His home is spotless but he doesn’t know how to dress himself and he doesn’t own a tv. Zoey focuses in on his “cute buns” but I couldn’t quite get over the descriptions of this man who came into great wealth by writing a governmental computer spying program who dresses himself like a golf champion all the time because that’s all he ever saw his grandfather do.

I want to be very clear about something. I have been close to men who are assholes and men who are babies and while the former might be more immediately dangerous, the latter is like a parasite who will suck out your will to live from the inside until you don’t have the strength to leave and you feel the obligation to take care of them forever. Zoey jumps from the frying pan into the fire when she falls for Tristan in New York – she buys him a Playstation 3 for crying out loud. The “I’ll take care of you/Mom”-vibes should be a cautionary tale and not something to aspire to.

The one good thing I can say about this book is that the brief sex scenes are pretty good, but not anything to write home about when there are so many better options out there. One of the two scenes involves Tristan letting Zoey buy an outfit at the golf store and she giggles through buying an outfit that she describes as “Catholic schoolgirl – golf edition.”

All of this happens over the course of like, a week. As I’ve written before, I have a real problem with fast love stories. Fast sex, sure. But “change my life for this guy I just met and basically had a fling with instead of staying single and figuring my life out post-divorce from this asshole I left” is a story I just do not find compelling in the year 2019.

Please just go read Jasmine Guillory. She’s new and fabulous and her stories are based on real relationship struggles over real-world timelines with believable attraction and conflict that make you interested in the story and invested in the characters. Under the Table was not believable and kind of cringey. Skip it.

Note: I need to remember to avoid books set in New York. I don’t know why, but I never like them and they tend to frustrate me.