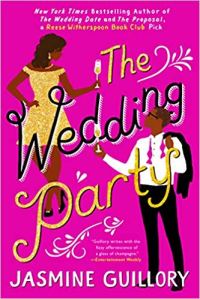 The Proposal (The Wedding Date #2)

The Wedding Party was received as a physical ARC from the publisher at the 2019 AWP Conference Book Fair. Scheduled date of publication is July 16, 2019 and preorders are currently accepted wherever books are sold.

There are four main elements to a Jasmine Guillory novel: an unexpected meeting, an intense physical connection, a miscommunication/makeup resolution, and some form of comfort food.

The Wedding Date had Alexa and Drew and doughnuts. The Proposal had Carlos and Nik and cupcakes. The Wedding Party presents us with Theo and Maddie and pizza.

The formula worked well in the first two books, mostly because the sex scenes were so hot and intense, and there was a pretty clear obstacle to the that the protagonists would need to eventually overcome to get to their happily ever after: Alexa and Drew had distance, and Carlos and Nik had Nik’s issues with safety and commitment. Plus the comfort food, there to give the audience another sense of connection and luxury, was more of a snack or dessert nature, something that we have as a guilty pleasure or as accompaniment to a meal. The cherry on top, as it were.

With the third and final installment of the trilogy, Maddie and Theo already know each other and have been rivals for Alexa’s attention. It’s an enemies to lovers type story that kind of deflates as it goes on. When they spend more meaningful time together and help each other out, it takes the teeth out of the enemies thing and just makes it a relationship. They decide to hide their escapades from Alexa, which seems really disingenuous considering they carry on for something like 8 months (spoiler alert, she notices).

The sex scenes in this book were really lacking. We see the start and the morning after, but none of the creamy center. Kind of ‘he spread her legs and dipped out of sight and she moaned – CUT TO THE NEXT MORNING THEY ARE MAKING COFFEE’ and I was disappointed. There was one scene where he went “in to the hilt” on the first thrust and then the scene ended and we were waking up the next morning. Also, Theo seems to have condoms stashed EVERYWHERE: his car, his desk, his bedside table, the kitchen, his pocket, in his ear, his wallet – I mean I get representing safe sex but this has got to be believable and it was NOT believable that in the middle of the livingroom Theo found a condom between the couch cushions, waggled his eyebrows, and then went to town. I found myself thinking, wait, where could that condom possibly have come from and why would he have had it stashed there? – and that really takes one out of the action.

Not only was the sex lackluster, the frequency with which they order pizza gave me heartburn and I wasn’t even the one eating it. “I’ll pick up a pizza!” “Let’s order a pizza!” “OMG I’m so hungry, let’s have Theo pop over with a pizza!” It was repetitive and only made me feel sorry for all of them. Honestly guys, your body starts to break down in your thirties and there was no way these characters, all in their thirties and gainfully employed, were eating this much pizza.

The ending was pretty formulaic, which was fine, but overall this last book did not wow me for all the reasons I’ve listed. If you’ve already read the first two you should read this one too, it has its enjoyable moments, but honestly if you haven’t read any of them yet you could read the first two and be fine skipping the third.