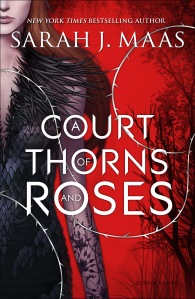 I love the Throne of Glass series, and that love encouraged me through this first, slightly understuffed pillow of a book. Again, there is the flavor of Beauty and the Beast which seems to be the tale as old as time in a lot of my books lately. Instead of her father stealing a rose, Feyre kills a wolf and sets things in motion. The overarching idea is that we have Fae and High Fae that live in Prythian, and there is a magical wall that protects the human world in the South from the multiple Fae courts of the North (Spring, Summer, Autumn, Winter, Dawn, Day, and Night). Humans cannot enter Prythian, but the Fae can travel into the human world.

It turns out that the wolf Feyre kills is actually a Fae in his animal form, and Tamlin (the High Lord of the Spring Court) comes to the human realm to claim her life in exchange for the one she took. She comes to live with him and slowly discovers the secrets and horrors of the Fae world. He discovers she likes to paint and gives her a gallery and another room in which to paint her own works (a la B &the B library scene), and eventually when the lurking danger becomes too immediate he sends her back to her family, and turns to face his fate alone. The only major difference is the set of trials Feyre has to face when she returns to save him and has to outwit Aramantha, the Queen of the High Fae who holds court Under the Mountain.

This book was…derivative. The sex scene was pretty hot, but my one complaint is the major complaint I have with all Disney movies: when did they have time to fall in love? How were they together enough to develop these feelings? Tamlin knew about the curse, so how did he organically fall in love with Feyre without feeling the duty to? If you read the book I ask you to let me know when you start feeling any chemistry outside of the one scene where he goes to her room. It’s emotionally barren. She doesn’t even know their history or that there is a curse, as Belle does in B & the B, so there would be no real reason to feel love out of pity even. When Tamlin suddenly tells her he loves her, I don’t believe it. It comes out of nowhere. He lets her go so she won’t be brutally murdered. The Beast lets Belle go because he loves her and wants her to go to take care of her father because he is sick and alone, and he knows that would bring her pain and unhappiness to know of that suffering and not be able to care for him. He is willing to let her go back because he cares about her happiness. If you love something let it go, and all that. Tamlin orders Feyre to leave because he doesn’t want her to be killed. I mean, I guess it’s the same but I would argue that the empty declarations of love plus the motive for sending her away does not endear me to Tamlin’s character. Any decent person would send her away to save her life.

The ending was very nice. The way the High Fae thank Feyre for her efforts and sacrifice is admirable and enviable. It holds hope and promise for the future. I hope it portends hope and a future for this series, because while I will be moving on to the second book out of respect for Sarah J Maas, had she not been at its helm it would have gone the way of dropped series.