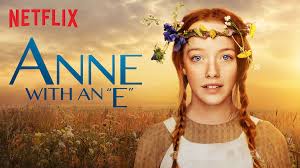 There are many books from my childhood that TV and Hollywood have attempted to lure me in with through visual wizardry, and I have resisted. Books like The BFG and The Giver were so good when I read them that I didn’t want to sully the movie in my imagination with the movie in real life. I’ve written about this before.

When I heard that Netflix was coming out with a new series based on the Anne of Green Gables books I was curious. I loved the original one with Megan Follows so much that seeing another more modern version might be fun. The books are fun for those of us who love to read and are a little off the beaten path upstairs, and this might be okay too.

The first episode was promising. I was a little worried about their portrayal of Matthew Cuthbert, but by the end of the episode his and Anne’s relationship was as it should be. The quiet softy and the gregarious spitfire, I couldn’t love it more. But it is here, dear friends, where the similarities that matter end.

This series is DARK and not like ironic/punk dark, it’s like PTSD/mental health issues dark. Instead of being portrayed as hopeful, precocious, and imaginative, this Anne is played as erratic, a little insane, and abused. I mean there are like 2 or 3 times per episode where she kind of blacks out because something triggers a terrible memory and pulls her into the past. Like when Josh in The West Wing heard cello music or whatever.

At first I was like, okay maybe this is how we move from darkness to light, maybe once she feels secure in her home and new life it will be like the sun coming up and it will be Anne charming everyone. I am writing this after watching 4 of the 6 episodes and I can inform you that it does not get better. And better in terms of the lightheartedness. I mean, I guess I can compare this to how I feel about the Jim Carrey Grinch movie. *spits* For some kids, that is their first exposure to the Grinch story, I guess because their parents hate them. In the same way, if Anne With An “E” is people’s first exposure to Anne of Green Gables on the small screen, maybe they won’t think it’s bad. The unfortunate thing is that most of us have had the TV Special Grinch and Jim Carrey’s physical comedy shitting all over our childhood is simply insulting and infuriating.

Anne of Green Gables is inspiring, she is a torch in the darkness, she is a fast friend and full of hope. She loves to learn and takes on every challenge with gusto. She is honest. This Anne is those things, but if you locked the original Anne in a closet full of spiders for two days and then asked her to come out and still be Anne. You get the sense that if it were an option, this Anne would be a self-mutilator because it helps keep the bad memories at bay. And I say that not to cast judgment, only to say that that isn’t the spirit of what Anne of Green Gables is. The focus is not on the past or darkness, it is on the future, light, and hopefulness in new beginnings.

I will finish the episodes that are there, and chastise myself for giving in when I already knew I had what I liked. Sometimes new and shiny isn’t better. Sometimes you just don’t have to put your hand on the burner to remind yourself that it hurts. This Anne of Green Gables hurts guys. It hurts to watch this. The writing is fine, the acting is fine, it’s just a haunted house/horror show version of something we already have set in our hearts, and that fucking hurts to watch.