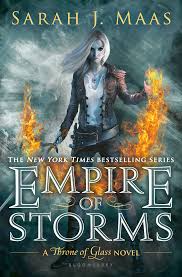 It takes a lot of endurance to stick with a long fantasy series. I never made it all the way through Terry Goodkind’s Sword of Truth series. I’ve never made it past the first of the Wheel of Time books (Robert Jordan). I have over and over again read the first two books of The Dark Tower journey (Stephen King). I think I’ve read 1.75 of the Game of Thrones books but to be fair, I am up to date on the HBO series. You have to be patient. You have to be willing to remember a lot of names, backstories, map locations, and plotlines. You have to believe that something amazing is coming.

As much as I love this series, the 5th book is not the time that this should be slowing down. The books kept me hooked through the amazing 4th story, Queen of Shadows, and my hopes were so high for Empire of Storms. She’s home in Terrasen! She’s going to be queen! I can’t wait to see her unleash her badass self on the world!

Except no, she’s not recognized by the lords or whatever and so they have to turn around and go do some other stuff to prove she’s worthy to be queen…wtf? We’re still following Aelin and Rowan, Aedion and Lysandra, Elide and Lochan, and now Dorian and Manon. Witches and Fae and humans and shifters and Kings and Queens and Princes…it’s all a bit overwhelming but not in a good way. There is so much going on that it’s like a constant humming in your ears through the entire book. I got so bored that by the time the new reveal happened in the last four chapters I was like, cool now I can finally be done with this goddamn book.

There are some sexy times which are an enjoyable read, but after like three of them I wanted to write to Maas and say that they don’t make up for a boring plot. They distracted me at first but then I became numb to them and my mind demanded more. It demanded the action and intrigue of Queen of Shadows. It longed for the climax of the story, not of the characters.

It was cool to see Lysandra as a shifter and playing a key role in helping the group survive. Her excitement at being able to be herself again once magic was freed was so fun, and I wish I had pictures of the different things she chose to become. That sounds like an interesting, useful ability, and is one that turns the tide at the end of the book.

I don’t know when the next book is coming out, but I demand that it be better than this. This series is awesome and it has such a cool premise, but it needs to keep up with itself. This book was a disappointment – it was good but it wasn’t so good that it kept me coming back like the previous four books did. It took me almost three weeks to read it, and as you all know that’s very unlike me.

If I could offer any advice it would be to read this one as fast as you can. Just get through it quickly so you don’t get bogged down and disgruntled like I did. I still think this series has merit, so stick with it, but gosh this book did not make it easy.

One thought on “Empire of Storms (Throne of Glass #5)”