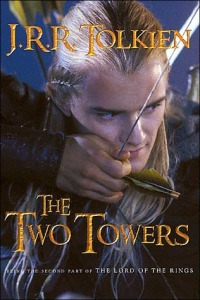 LOTR: The Fellowship of the Ring

This series is actually a set of six books condensed into 3. In this second volume we have book 3 which outlines Gimli, Aragorn, and Legolas’ search for Merry and Pippin after they are taken by the Orcs, their interactions with Fangorn forest and Treebeard, and the journey to and defense of Rohan at Helm’s Deep. This part was very easy to follow because of my enjoyment of the movies, but the book added some very nice details to things I already knew. I got to spend more time with Treebeard and learn about the Ents, and Rohan was a little less moody and more honor bound than the movie would have you think.

The second half, book 4, follows Frodo, Sam, and Gollum as they move towards Mordor. They arrive at the Black Gate, Gollum briefly becomes Smeagol due to the kindness and mercy of Frodo, and then they pass through the daddy issues in Gondor which breaks the good streak in Gollum and upon their release by Faramir, he decides to lead them to the giant spider Shelob on the alternate path to Mt. Doom to have her kill the hobbits so he can take the ring for his own again. In this half I was also glad to find extra useful information that the movie left out, and so I enjoyed reading as much as I enjoyed watching.

I have found a complaint! One of the major differences between the movies and the books thus far has been the depiction of the Aragorn character. The long lost king of Gondor in exile as the Ranger called Strider, Aragorn is the most important character in the stories besides the hobbits.

In the books Aragorn is a whiny bitch who has Elendil (the sword that was broken by Sauron but is reforged by the elves) from the start after the first visit to Rivendell and waves it around all the time, announcing who he is to anyone who tries to get in his way. By the time I got to the end of book 3 I was so tired of Aragorn that I didn’t even care if he ever became king.

In the movies he is hesitant to take up the mantle of king, content to remain in the shadows and avoid taking a chance that the weakness that caused his ancestor to fail to destroy the ring of power might also run in his blood and take hold of him as well. Until Lord Elrond brings him Elendil in The Return of the King movie, he doesn’t announce his heritage anywhere. This is definitely a rare circumstance when I believe the movie handled a character better than the books. Sorry Tolkien.