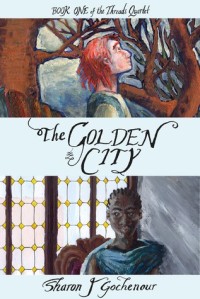 This ARC was provided to me directly by the author in return for an honest review. I don’t typically review self-published books, and it becomes even more precarious when the author is a friend, but the cover was intriguing and I was up for the challenge.

Sharon Gochenour doesn’t ease you into the first book of her Threads Quartet. You are immediately thrust into a desert caravan that is in danger of being buried by an oncoming sandstorm. The main character Tadala makes a fast decision to race towards a structure in the distance with her twin half siblings in a last ditch attempt to save their lives. What they discover is a strange city seemingly out of time and space with beautiful gardens, food, and sanctuary, as well as an eccentric woman named Elabel who takes them in and cares for them for a strangely long period of time. When it is discovered that the caravan is lost, Elabel helps Tadala bury them, exposing her seemingly magical powers.

Once Tadala disovers Elabel’s powers, Elabel asks for her help in locating some of the threads. Tadala isn’t sure about what those are, but once she happens upon a weak spot, they seem to be links to the past or possibly to an alternate universe. It is here that we are introduced to the Empress-Elect Elabel, and we learn where she has come from, why she is alone in this city in the desert, and what it might take to return her to her people as a full and strong Empress, with Tadala and the twins along for help and support.

I enjoyed reading this book. The story is compelling and you will be tugged along the thread of the plot with a desire to know how things turn out. The idea of threads that connect everything and that only certain people are able to see and manipulate them is an original, thoughtful device that I enjoyed learning about and exploring.

The character Elabel is very weak, not in development but in her character. I found myself becoming frustrated with her, especially because she is constantly apologizing and never seems to take up any power over herself. To be declared an Empress-Elect by her society’s systems and be so shy and withdrawn seemed too much of a stretch for the story, especially when contrasted with the strength of the Recorder and Swordkeeper that were chosen from her family as well. The mythology behind her society is so interesting though that your curiosity about that will help you excuse the mousiness of the Empress-Elect for the middle portion of the book.

This quartet has a lot of potential. With a professional editor and a publishing house I feel as though it could find its place among other books in the fantasy genre which are flourishing at the moment with dragons and magic. In fact, my only criticism was the editing – there were places I felt went on too long when I already had the point of it, or language that seemed too flowery to belong with the other things that had been said, or details that were rushed through that maybe needed to breathe more air to add weight to the plot.

Gochenour has unearthed a diamond in the rough with her creative mind, writing style, and original themes. Give it a try and you just might think so too. I hope that someone higher up gives the manuscripts a chance, because with a little polishing, this series could be a real gem that I wouldn’t want the world to miss out on.