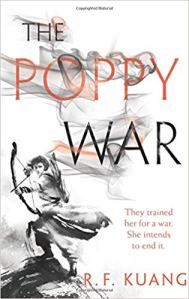 The Poppy War is a book about tests and schools and usually those are totally my jam. Runin (Rin for short) is a war orphan from the second poppy war. Her foster parents tell her at age 14 that she will be marrying a much older man once she turns 16, so she makes a deal with her tutor and her foster parents that if she take’s the country’s placement test and tests into the tuition-free military academy, that she can leave and not have to marry. She studies and memorizes and crams for two straight years and manages to score high enough to place into the Sinegard Academy.

When she arrives she experiences what you would expect from rich, pampered kids who are trained from birth to come to this academy – her skin is darker and she’s from one of the poorest provinces – they think she cheated to get in or that she was let in to make the test seem fair, and she would be sent home after the Trials that all first years must pass. She works hard and discovers a unique power within her along the way, something that hasn’t been seen since the end of the Second Poppy War. Rin can meditate and reach the Pantheon of gods to call on their power and use it as her own, but with a price.

It’s a very enjoyable book through about the first hald. It gives glimpses into Chinese history through a fantasy story and map, and I find that it’s much easier to learn things that way, or at least to prompt questions that I can ask the husband, who is am expert in world history topics. The story about the school is neat, and the topics they study are interesting. I found myself thinking of The Name of the Wind as I was reading this book: poor person tests into school they shouldn’t belong at, must impress a particular professor in order to remain at school, gets banned from a certain aspect of the school so they have to adjust and train themselves, trains to discover something/skill/knowledge people thought was long dead, now has a dangerous power they don’t know how to control, etc. etc.

My only confusion came when Rin’s motivation abruptly shifted from “be the best I can be so I don’t have to marry or have kids” to “REVENGE.” Like, revenge against who? It was such a fast shift in her narrative that it was like hitting a brick wall in her character development. The only way a revenge story works is if I feel like I want revenge too on the character’s behalf. I get her thirst for power over her own destiny, but I feel like the hunger for revenge isn’t earned in the plot.

Also the second half of the book gets bogged down in a new war that we only see through Rin’s perspective, and most of that time is spent agonizing over her powers and whether or not she should access them. I found myself getting bored toward the end, if only because war is pretty boring on the page without some kind of action or fighting. When most of it was just hanging around the camp being angsty about gods, I lost interest. The most interesting developments happen in the last twenty pages, but the fact that they came after such a down period made them less exciting. I won’t spoil it for you, but by the end I didn’t have anyone I was rooting for, barely understood what was going on, and just wanted to send the book back to the library.

I have the sequel as an advanced reader copy, so I’ll let you all know if the series gets better in book 2. If you’ve read my reviews for awhile though, you know that rarely happens, as book 2 tends to lag even worse than book 1. There was enough in this first installment to get me to read the entire story, but now I wish I could go back and undo the reading of it so I could try something else. Take from that what you will.